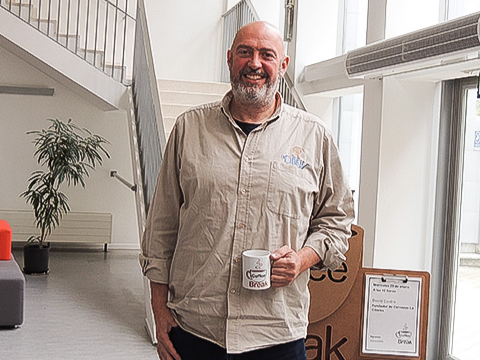 David Castro, from Madrid and proud to be, developed his professional life as an employee in the IT sector. After having a successful career in management and responsibility positions at the age of 37, he decides to turn his professional life around and leave this stable and more or less certain world that little by little he was losing interest due to the conjunctures of the great corporations.

For a time he debates between various projects to undertake, but in the end and after analyzing different issues he opts for something that he has also always liked a lot, such as beer.

At the beginning, he dedicates his time to training on how beer is made and begins to make it at home on a private basis. He begins to like the beer he brews and his friends and acquaintances begin to demand it of him. It is here that he considers how to turn something that had almost started as entertainment into a business.

He explains to us that in his search as an entrepreneur he wanted a project that was sufficient, rewarding and secure. On these three pillars, he has built his own.

One of the things that has given him the greatest satisfaction is that he has managed to innovate within a very traditional sector, such as the brewery.

Hard work and dedicating a lot of time to your project is one of the bases for something that started ten years ago to be consolidated and bear fruit. In order to be able to produce beer on a large scale, he spent a lot of time traveling around the world, learning from companies that knew and were aligned with his goals.

When looking for the partners who accompanied him at the beginning, he recommends that we look for people who complement us. For example, your project started with four partners. One was a lawyer, another an expert in banking, the third an insurance expert, and the fourth was a well-connected person. For him, these people were the ones who complemented his business idea and the ones who made it possible to overcome all the obstacles that getting started puts you in the way.

Like many, he went through difficult times, where throwing in the towel was an option. His experience taught him that we do not have to stay with those "ups and downs", but rather that we have to look at the trend and not in the short term.

He advises us that, as far as possible, we use the virtues, the good, the only thing of the place where we set our project. In his case, and being a fundamental part of brewing, water, Madrid took advantage of this water that we have that is the same in few places and that helps to be different from their beers.

After his presentation, David shared a coffee with the attendees, enjoying a very pleasant time with all those who attended this very interesting Coffee Break.

If you were unable to attend, you can check the video of the session on our website. Facebook.

To attend the Coffee break  or other events that we organize in the Madrid Emprende network of business incubators, do not forget to subscribe to our activity bulletin or consult our schedule.