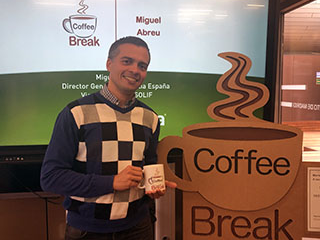 Miguel Abreu began at a very young age in his native Venezuela, to develop his entrepreneurial facet. While still in college, he decided to start a project with a group of friends called Ocio Venezuela between 1998 and 2001.
Due to his studies in computer engineering, Miguel was able to carry out an idea that launched one of the first chat services in his country, through a web, installed on a newly born web server at that time, Apache.
However, despite the fact that this project did not work, far from being discouraged, Miguel once again takes advantage of an opportunity that is already presented to him in Spain through a well-known job search portal. From 2008 to 2013, he began his career at Betware, an Icelandic company dedicated to offering a platform for lottery companies to sell online.
Due to the direction that the company where he was working at that time was going to take, to be acquired by another more powerful business group, Miguel decides to combine it with his work, and while he waited to develop his own company, he became part of the team of BChallenged, a platform to facilitate bets based on video game matches.
In addition, at that time, and due to his enormous entrepreneurial spirit, he made the decision to launch an online fashion portal between 2010 and 2014, which later became a website that served personal shopper for foreign visitors in Spain, although it did not achieve the expected results, this was essential for everything that would come later.
All the experiences he has had throughout his professional career show us the path that later led him to create his own company, Magnolia, which began in 2013.
As the leader of his company, he recommends that all entrepreneurs surround themselves with good suppliers and let the team act, valuing what they have, not only the product, but also the people who are part of the company.
All the undertakings that he has carried out as country manager of foreign companies throughout these 11 years have helped him to carry out this very personal project that is Magnolia Spain.
You have remembered that the distribution of a company in equal parts does not usually work, that is why it is always essential to appoint a leader who is in charge of making most of the decisions.
“For me, entrepreneurship is a lifestyle, and you have to try to enjoy yourself along the way” he explained to the attendees.
He has also commented that going to business incubators seems fundamental to him, since surrounding himself with people who are going through the same situation as you can help you when facing your business.
To end the day, the attendees shared a coffee and made networking in the common area of the Moratalaz nursery.
If you were unable to attend, you can check the video of the session on our website. Facebook.
To attend the Coffee break or other events that we organize do not forget to subscribe to our activity bulletin or consult our schedule.